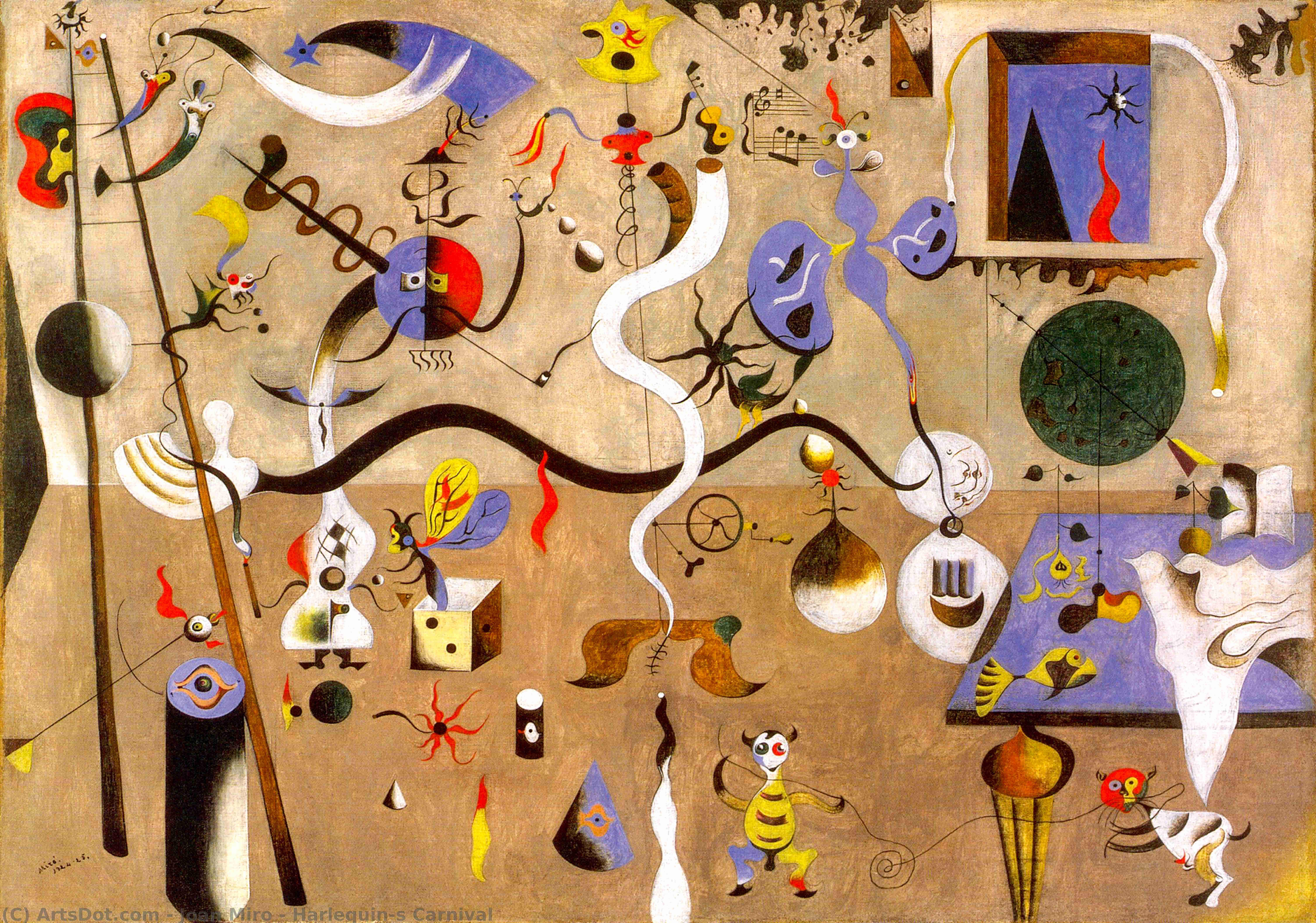 The Harlequin’s Carnival (Carnaval d'Arlequin in Catalan) is one of Joan Miró’s most iconic works. This painting was created about the time Miró had just joined the Surrealist movement in Paris, founded in 1924 by poet André Breton. Surrealist artists created a visual realm where the unconscious mind and the dreams became a landscape inhabited by fictional figures and objects, which metaphorically embodied their own desires and traumas. Miró developed a very particular style and a private system of imagery in which motifs have symbolic meanings that vary according to their context. These "personages", as he would refer to his abstract figures, with characteristics of both humans and animals, are often found in his works configuring lyrical compositions alongside anthropomorphized objects. In this painting we find them playing, singing, dancing, and celebrating, with music literally in the air. This euphoria infused scene probably depicts Mardi Gras, the celebration that precedes fasting during the penitential season of Lent in the Catholic liturgical calendar. The idea of fasting is related to the ascetic discipline Miró would lead in his Parisian studio on the rue Blomet, enforced by his poverty at the time, all of which had a direct impact on his paintings. As he would describe later: “The ball of yarn unraveled by cats dresses up as smoky harlequins twisting around inside me and stabbing my gut during the period of my great hunger that gave birth to the hallucinations recorded in this painting”. The figure of the Harlequin depicted in the central-left portion of the canvas with a half-red, half-blue mask and diamond pattern on his tunic references the foolish character popularized in the Italian commedia dell’arte, who is perpetually unsuccessful in love. Artists have often used this figure to represent themselves, and the hole in Harlequin’s stomach may allude to Miró’s own poverty and hunger. Miró came to know of this iconic character through the work of Pablo Picasso, who was also involved with the Surrealist group. Picasso’s influence in the work of Joan Miró also reflects on his figuration, still very reminiscent of Cubism at the moment. This painting belongs to a transitional period, in which the artist had not yet let go of classical compositional elements using perspective and depth, as we see in the table and window. The grounds of his paintings will later evolve into more abstract and ethereal atmospheres of a purely abstract nature.