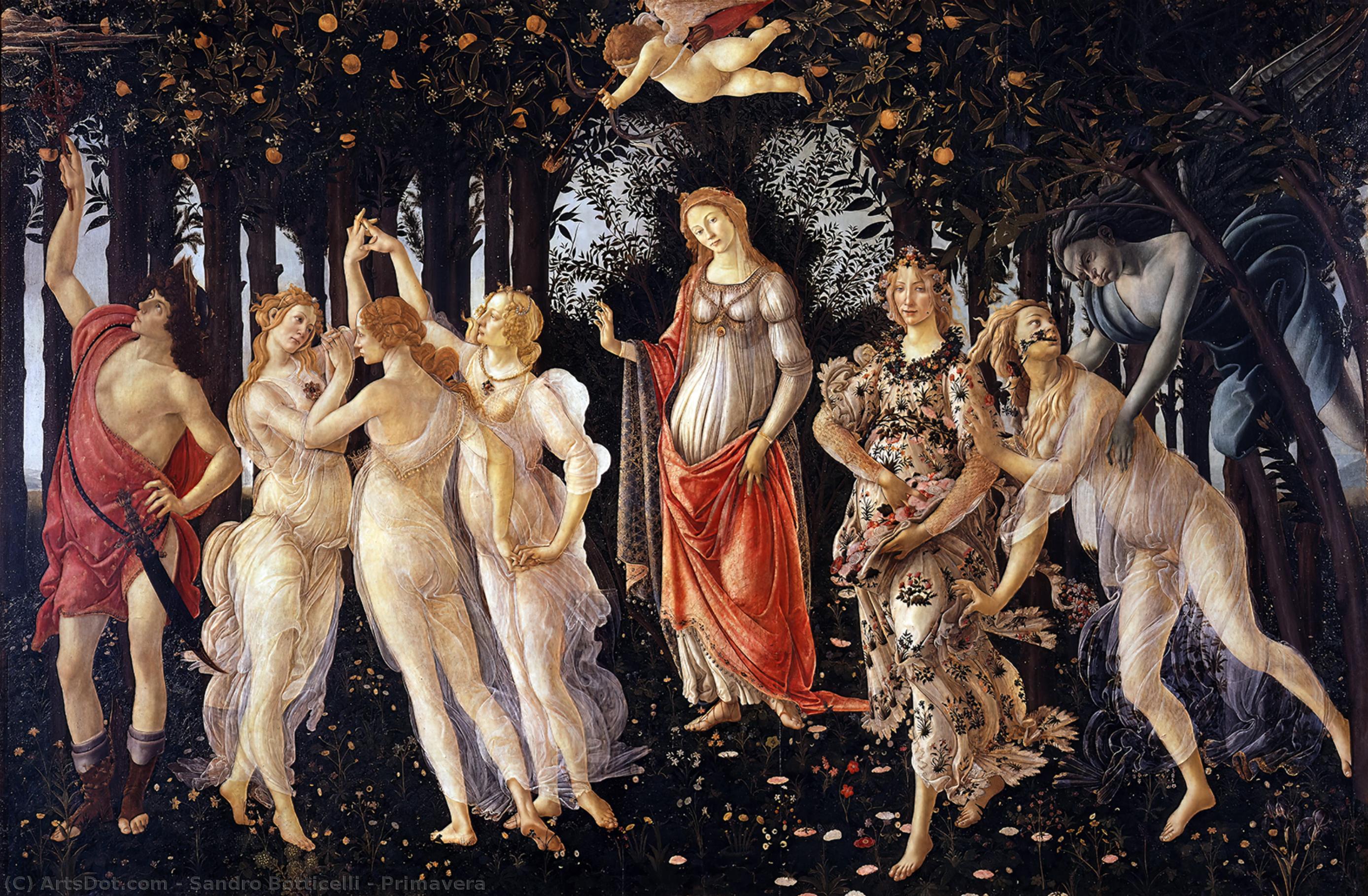 Primavera, also known as Allegory of Spring, is a tempera panel painting by Italian Renaissance artist Sandro Botticelli. Painted ca. 1482, the painting is described in Culture & Values (2009) as "[o]ne of the most popular paintings in Western art". It is also, according to Botticelli, Primavera (1998), "one of the most written about, and most controversial paintings in the world." While most critics agree that the painting, depicting a group ofmythological figures in a garden, is allegorical for the lush growth of Spring, other meanings have also been explored. Among them, the work is sometimes cited as illustrating the ideal of Neoplatonic love. The painting itself carries no title and was first called La Primavera by the art historian Giorgio Vasari who saw it at Villa Castello, just outside Florence, in 1550. The history of the painting is not certainly known, though it seems to have been commissioned by one of the Medici family. It contains elements of Ovid and Lucretius and may have been inspired by a poem by Poliziano. Since 1919 the painting has been part of the collection of the Uffizi Gallery in Florence, Italy. The painting features six female figures and two male, along with a blindfolded cupid, in an orange grove. To the right of the painting, a flower-crowned female figure in a floral-patterned dress is scattering flowers, collected in the folds of her gown. Her nearest companion, a woman in diaphanous white, is being seized by a winged male from above. His cheeks are puffed, his expression intent, and his unnatural complexion separates him from the rest of the figures. The trees around him blow in the direction of his entry, as does the skirt of the woman he is seizing. The drapery of her companion blows in the other direction. Clustered on the left, a group of three females (they are the three Graces - beauty, joy and charm), also in diaphanous white, join hands in a dance, while a red-draped youth with a sword and a helmet near them raises a wooden rod towards some wispy gray clouds. Two of the women wear prominent necklaces. The flying cherub has an arrow nocked to loose, directed towards the dancing girls. Central and somewhat isolated from the other figures stands a red-draped woman in blue. Like the flower-gatherer, she returns the viewer's gaze. The trees behind her form a broken arch to draw the eye. The pastoral scenery is elaborate. Botticelli (2002) indicates there are 500 identified plant species depicted in the painting, with about 190 different flowers. Botticelli. Primavera (1998) says that of the 190 different species of flowers depicted, at least 130 have been specifically named. The overall appearance of the painting is similar to Flemish tapestries that were popular at the time.