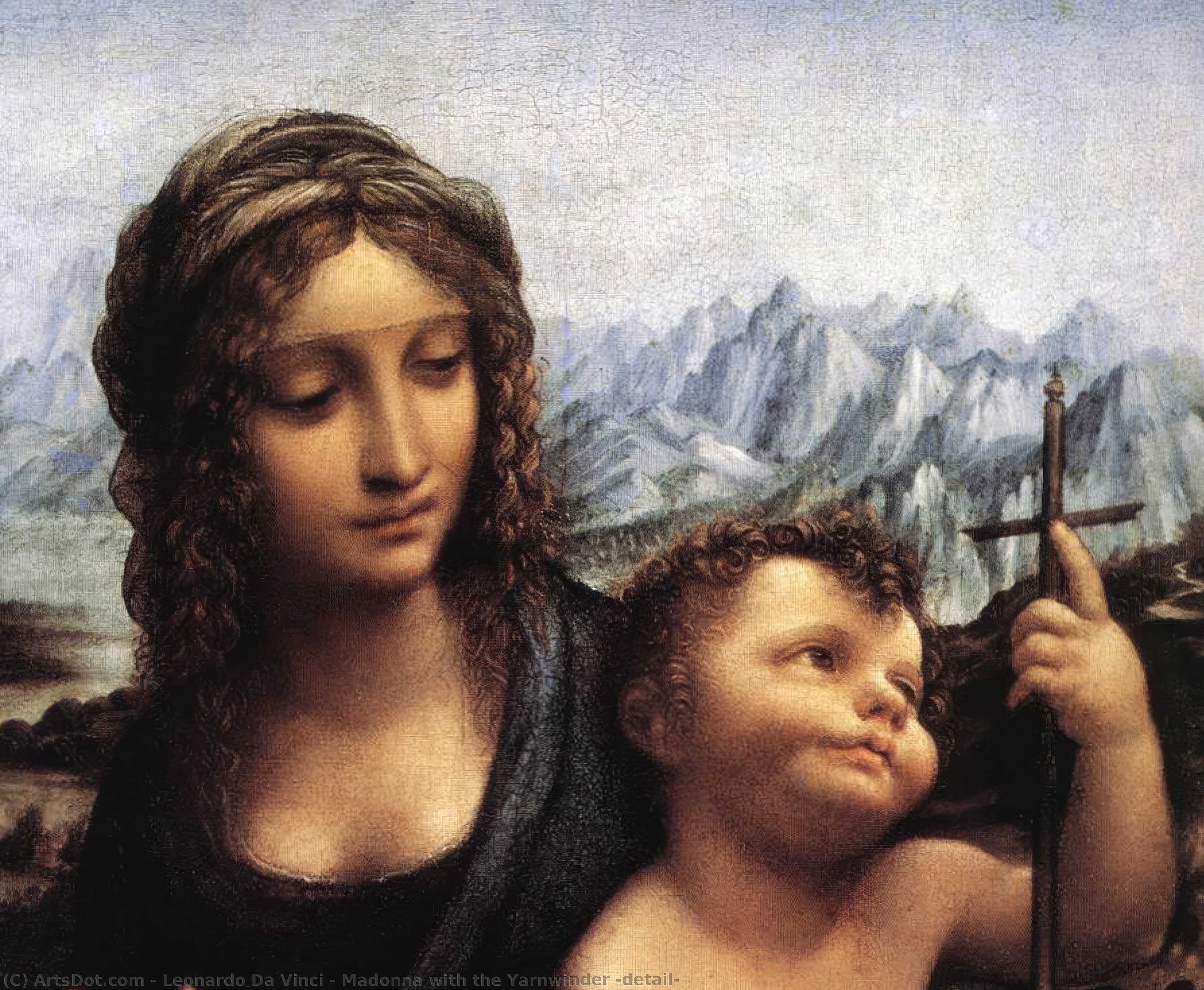 "There are two versions of the Virgin of the Rocks, one (the earlier) in the Louvre, Paris and another in the National Gallery, London.This version of the painting for the ancona (a carved wooden altar with frames where paintings were inserted) in the chapel of the Immacolata in the church of San Francesco Grande in Milan has distinctly sixteenth-century characteristics: larger figures, made more plastic by a very decided chiaroscuro so unlike Leonardo that scholars were immediately led to consider the work a collaboration. The canvas is generally considered the one that replaced the first version of the Virgin of the Rocks on the altar of the Immaculate Conception, after that version had been given to Louis XII. This version was then, in 1785, purchased by the English collector Gavin Hamilton. It was joined, in England, in 1898, by the two musician-angels of the De Predis brothers, and the three paintings are now displayed together in London's National Gallery.The picture substitutes a motif popular in Florence for the image normally required by Franciscan patrons promoting the doctrine of Mary's Immaculate Conception: a Virgin without the Child, shown standing among prophets holding texts taken to refer to her exemption from Original Sin. In the Virgin of the Rocks the infant Baptist, sheltering under Mary's cloak, venerates the Christ Child in a cool, watery wilderness. The artist's Milanese clients must have worried about confusing the two infants, for a later hand has given John an identifying scroll and a cross clumsily rooted in one of Leonardo's exquisite studies of plants.The panel was inserted into a pre-existing frame, elaborately decorated with carving, gilding and painted shutters. (The two musical angels shown nearby, executed by an associate, probably come from the front and back of the right-hand shutter.) In the candlelit chapel the glittering frame and the painted rocks from whose shadows the figures emerge would have combined to suggest a mysterious cavern. In his notebooks Leonardo records a moment, when standing before the mouth of a cave, `Suddenly two things arose in me...fear of the menacing darkness... [and] desire to see if there was any marvellous thing within.' The contrast between the unfinished areas of the picture - such as the hand of the angel on Christ's back - and the finished passages would not have been as disturbing as it is now. Leonardo's intentions in this deeply emotional yet strangely uncommunicative work were perhaps most fully carried out in the angel's head and diaphanous veil, where the shimmering brushstrokes are of miraculous firmness and delicacy.The London version shows some details generally neglected by Leonardo in the other version: the haloes of the figures, the child Saint John's cross of reeds. Other elements which differ from the Paris picture are the pose of the angel, who no longer points his finger towards the little Paraclete, and his face, whose gaze no longer seeks out the spectator, but is directed inwards. The drapery, too, which in the Paris version was heavy and concealed the body, is lighter here, revealing the anatomical structure. Also the rocks seem painted in a more plastic fashion; the light does not glide over them, creating dewy areas of semi-darkness, but leaves strong contrasts of light and dark. The flesh of the children here is less tender, and though the shadows are insistent, the children's faces seem flatter and less sweet than those of the two sublime creatures in Paris. The intervention of followers on the painting already sketched by Leonardo has made the portrayal less vibrant, more banal, though it retains a compositional authority and an originality in its variants that make this work not a copy but an autonomous version, of high quality, of the unequalled masterpiece in the Louvre."