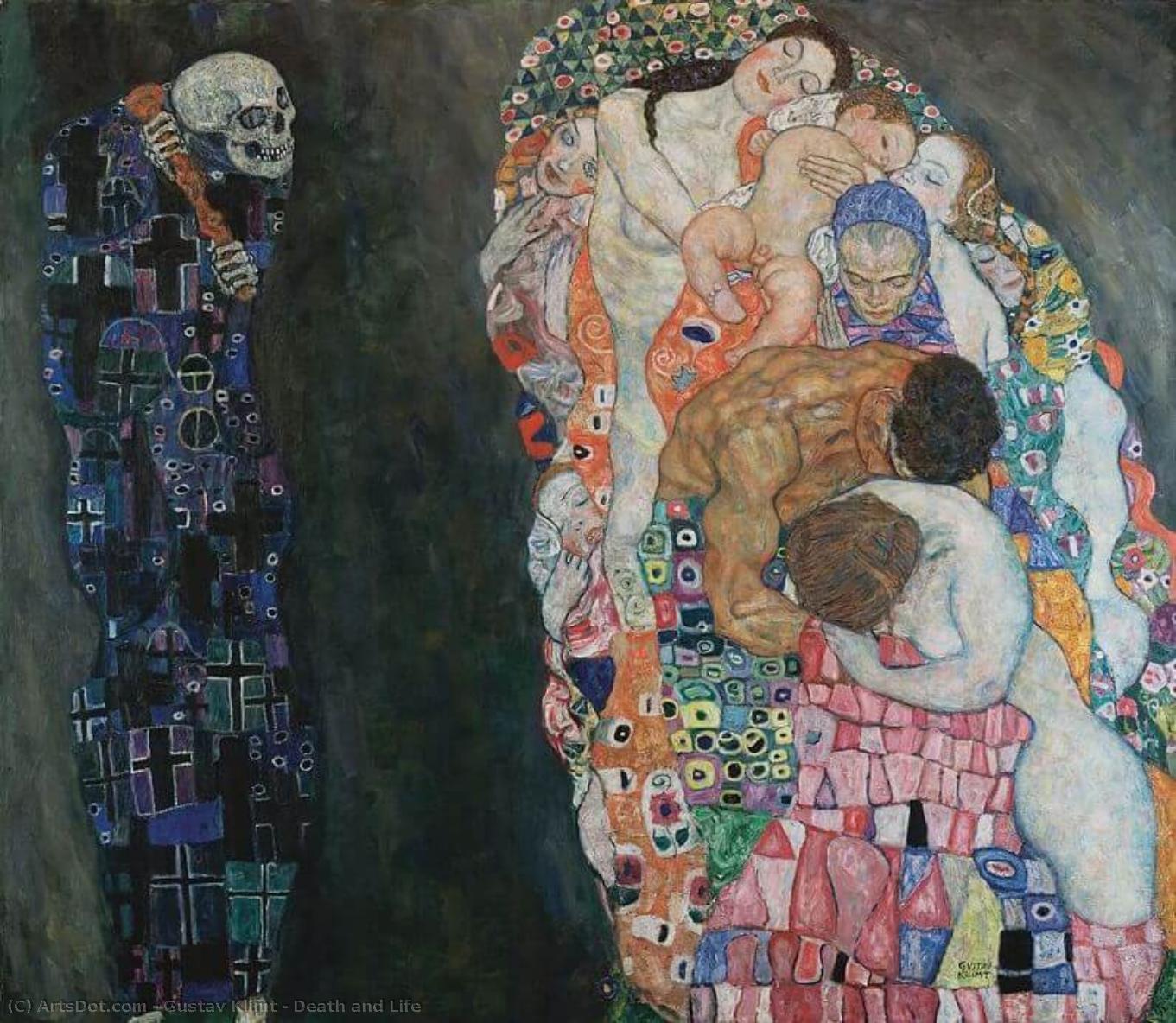 Gustav Klimt’s large painting Death and Life, created in 1910, features not a personal death but rather merely an allegorical Grim Reaper who gazes at “life” with a malicious grin. This “life” is comprised of all generations: every age group is represented, from the baby to the grandmother, in this depiction of the never-ending circle of life. Death may be able to swipe individuals from life, but life itself, humanity as a whole, will always elude his grasp. The circle of life likewise repeats itself in the diverse, wonderful, pastel-coloured circular ornaments which adorn life like a garland. Gustav Klimt described this painting, which was honoured with a first prize at the 1911 International Art Exhibition in Rome, as his most important figurative work. Even so, he seems to suddenly no longer have been satisfied with this version in 1915, for he then began making changes to the painting—which had by that time long since been framed. The background, reportedly once gold-coloured, was made grey, and both death and life were given further ornaments. Standing before the original and examining the left interior edge of Josef Hoffmann’s frame for the painting, one can still discern traces of the subsequent over-painting, which was done by Klimt himself. Death and Life has two very clearly separated parts. To the left, we see Death. Death is depicted and the classic grim reaper, a grinning skull, covered in a dark robe covered with symbols. The main symbol we see covering Death is that of the cross. To the right we see life. We see a number of young women lying on a flower bed. We have seen similar flower beds before, e.g. in The Kiss We see a newly created life, a baby, lying in their arms. We see a muscular man holding one of the women and we see an older woman also lying in the middle of the group. The depiction thus covers people, young and old, with a focus on the adults in their best age. There is an over representation of women in the painting which could refer to women as the source of all life. It could also reflect Klimt’s preference for depiction women, preferably somewhat undressed. All the subjects are somewhat covered by cloth bearing numerous symbols. The composition and execution is thus typical Klimt, with symbols taking a center stage. Only pure colors are used in this paintings, and Gustav Klimt sculpted the figures in his canvase in soft rounded contours. An aging, tired master, Among the master pieces of Gustav Klimt, Death and Life won the first price at the world exhibition in Rome in 1911.